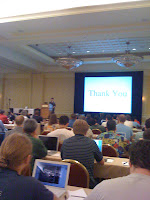 The crowd of over 400 was happily awaiting the kickoff in Orlando of RubyConf 2008. After brief introductions from Rich Kilmer and David Black, Matz took the stage for his opening keynote.

Reasons Behind Ruby
8 years ago was the 1st International Ruby Conference, and there were only 33 people there. Obviously since then, the community has grown. Matz said he was not going to talk about technical stuff.

Question - Why Ruby?
Matz joked that it is his beloved masterpiece. Really though, Matz loves languages, and also loves freedom. His reason for creating Ruby was to maximize freedom.

There are still a few problems. Ruby is imperfect, slow, lacks features, and is complex. And there's more. Ruby is inconsistent, has a poor implementation, has memory issues, and embedding issues.

So why do we love Ruby? "Programmers Strange Love, Or How I learned to Stop Worrying and Love Ruby"

The greatest Reason behind Ruby is Love. It made programming fun again. Again? It used to be fun.

In 1980, Matz began programming in BASIC. He liked that he could make intelligence, and felt a sense of creation. But there was also great pain.

The Basic Aristocracy
There was a big difference between language designers, vs. lowly programmers. In BASIC you cannot add to the language, and there is no abstraction.

Lisp
Everything is opposite in Lisp from BASIC. In Lisp, there is no discrimination and extreme abstraction.

As Eric Raymond said, "Lisp is worth learning for the profound enlightenment experience you will have when you finally get it; that experience will make you a better programmer for the rest of your days..."

However, Lisp was great in a book, not in reality. Programming in Lisp did not make him happy. Was it all the parentheses? No. Was it the macros? Partially.

It came down to the fact that smart people just underestimate the "ordinarity" of ordinary people.

Aristocracy is OK, as long as I have POWER. Matz wants to be between "owelty" and freedom (none of us in the audience knew what he had meant by "owelty" either, but Matz was on a roll, so we went with it).

BASIC gives you no power, Lisp gives you all power. But at both ends we lose popularity. If you stay in BASIC you are a coward, and if you go extreme, you are brave but you risk your life (or popularity).

We all love power. You see, policy matters. We need philosophy and attitude.

Then along came Rails which turned Ruby into a web DSL. You see, Ruby is about vocabulary. It has rules, or syntax. There are others, for example Rake and RSpec.

Ruby is really like a meta-DSL. It provides a foundation for DSL's, which increases our overall productivity.

But beware of commercial success, because they will try to take your freedom away.

Matz then mentions the 4X growth expected in Ruby programmers from the current 1 million to over 4 millions. There will be NEW people coming into the community, so welcome them and nourish them. Ruby can have the power to raise up people in the programming field, so feed them, and love them.

He loves us all.

We love you too, Matz.

I attended a number of interesting sessions throughout RubyConf 2008 day 1. Per previous reader feedback (keep each post to a manageable size!), I will put each into a separate post. Here is what I will be covering:

I missed a few of the lightning talks while having a nice dinner with David Black, Jim Freeze, and Paul Brannan. Hanging out with really smart people is like a continuous lightning talk, so I didn't feel deprived by any means. Thanks, guys!

After the lightning, as it were, we had the second ever Ruby Jam Session. This time, about 5 people brought guitars, including Ruby Jams veterans like Jim Weirich and Forrest Chang, and lots of new friends showed up as well. I was better prepared this time around, and had brought about 10 harmonicas with me. But the tastiest part of the jam, was at the very end when David Chelimsky and Diego Scataglini played some really great jazz standards. A couple of tasty beers followed the music, and then it was off to rest up for RubyConf Day 2.
Posted by Ron Evans at 9:58 AM