With the high cost (and carbon!) of transportation, as well as the burden of the increased time it takes to fight your way through the congestion, we all need to change the way that we navigate thru our daily lives. I had decided to take public transportation to get from my house in Los Angeles, to RailsConf 2008 in Portland, OR.

When I first mentioned my plans, several friends and family members were incredulous. "It takes too long, " stated one person. "There's no way to get to airport in LA except by car, " scoffed another. I set out to prove them wrong, and by doing so began a new chapter in how I approach personal transportation.

I set out from my house in Silver Lake, walking down the hill to Sunset Blvd. I stopped at the delightful Cuban coffeehouse Cafe Tropical, which happened to be directly adjacent to the bus stop I would need to use. 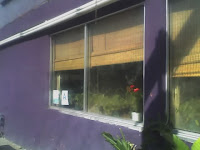 I sipped a tasty cup and snacked on one of the delicious pastries while I awaited my first bus. 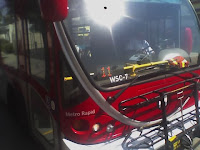 I jumped quickly (literally, they do not wait around) on the Route 704, which is a giant segmented affair. Despite that, the bus was almost completely filled until we reached the Evans Community Adult School (no relation), at which point almost the entire bus emptied out.

One notable feature of the ride were the video screens filled with advertising prominently situated on the bus, an attempt to subsidize the cost of the public transportation system here in L.A. 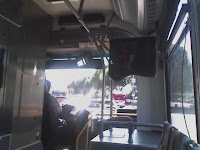 On reaching the Union Station stop, I exited the bus. I would need to walk to the FlyAway bus terminal to catch the non-stop shuttle to LAX. The way was clearly marked. 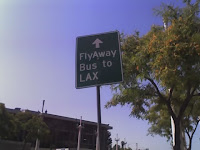 They wanted to make sure you could not make a wrong turn!

I purchased my ticket at a friendly kiosk. 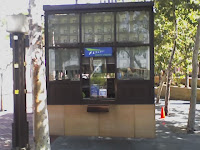 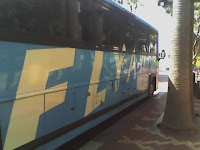 While I waited to board, I asked a half-dozen of my fellow travelers if they had taken the FlyAway shuttle before. All except one were first-timers, like myself.

We reached the airport quickly from the downtown Union Station. No having to drive, allowed me to check my email (GMail Mobile is still cool on my cheap phone) and daydream. Suddenly we had arrived at LAX. I noticed that my airline was in the very last terminal, and since the FlyAway shuttle would stop at each and every terminal first, I decided to get off there and cross the airport on foot.

It would seem there is plenty of parking, and available charging terminals, if you have a plug-in electric car. 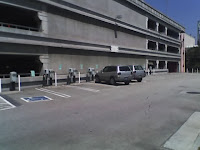 I had made it to the airport in about 1 hour and 15 minutes, which was about the same amount of time that it would have taken me to drive my car to the airport parking, park, get on a shuttle bus to the airport from the parking location. Except my cost for transportation had been $5.25 instead of the fuel, plus the $60-80 for parking. With a small portion of my savings, I smugly purchased a copy of Predictably Irrational at an overpriced airport bookstore to read on the flight.

On exiting my plane in Portland, it turned out they were having a party to celebrate Portland having now become an international airport. 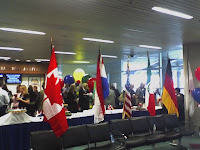 Politely refusing a multi-colored cupcake, I walked to the end of the terminal where the MAX, Portland's modern light rail system awaited. 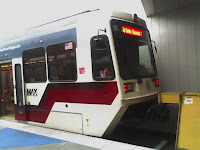 I purchased a ticket from a automated kiosk, then hopped on the train. Around 15 minutes later, I had arrived at my destination.

I had successfully arrived in Portland for RailsConf 2008 only using public transportation! After checking into my hotel, I dashed across the street to the convention center. Alas, the registration had closed for the day exactly on time. Yes, these O'Reilly people are all business. More on that in my post on RailsConf 2008 - Day 1...

My luck would turn around quickly. I immediately ran into friends David Chelimsky and Micah Martin, who invited me to tag along for dinner. When you're hanging out with guys as smart as these, you absolutely cannot be bored, and you will learn a LOT! Plus, one thing about Chicagoans, we know how to pick a good place to eat. David led us on a brief journey to a great Thai place he knew of, and between the great food, beer, and conversation, we had a delightful time. Thanks guys, I appreciate it!
Posted by Ron Evans at 11:31 AM

Why didn't you take a train from LA to PDX? Then I woulda been impressed. :)

Actually, I did check out the Amtrak option. However, at the time I made my travel plans, the Coast Starlight was not in operation due to landslides that had damaged the tracks, and they did not have a timetable for repairs. They finally just reopened service May 5th, but I had already made my travel arrangements.

I will probably take the train next year!

I strongly disrecommend the Amtrak from LA to Portland, I've done it twice, and was never less than 12 hours late on the 30 hour trip.

I used to take the train from Seattle to LA, so I know what you mean! However, it could be fun if there is a group traveling... I remember a train car of people coming to the first RailsConf... were you one of them?