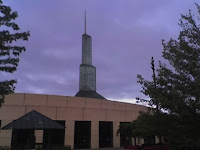 As RailsConf 2008 - Day 1 began, there was no avoiding a sense of just how large the community was growing. With over 2000 attendees, the physical presence was bigger than ever. But, unlike the first two conferences, the growth of the community had triggered inexorable changes. Unbeknownst to most attendees at RailsConf 2008, a rebel alliance had formed itself. The caboo.se crew, longtime Ruby on Rails committers, had decided to stick it to the MAN. Or as Courteney put it:

In May, if you don't want to cough up almost a thousand dollars to go learn things you already know, but want to come to Portland to network with skilled Rails coders from all over the world, instead of hanging out in the lobby at the Lloyd Center like I did last year, come to Caboose Conf.

The spawning impulse must have been too great for the cool kids. They were heavily conflicted when O'Reilly took over for RailsConf 2007. Not being one of them, I can only surmise how they felt. But no one likes to pay for something that once was free. And it is unpleasant to have a bunch of strangers running around what was once their private garden. But this was deeper, a sense that something had shifted, and would never return.

You can take the caboose out of the ghetto, but you cannot take the ghetto out of the caboose. Many people at RailsConf felt your absence, comrades, if any of you are reading this! As I mentioned earlier, the vast majority of attendees, including repeat ones, were totally unaware of the specifics. But they sensed something missing, some crucial element lacking.

At the same time, the community is now larger. And there are tremendous advantages to the incursions of the money people into the private reserve. The people who were saying to each other in 2006, "I wish I could program in Rails full-time, and quit programming in Java/C#/WTFLang" were now saying "I wish recruiters would stop harassing me!"

That all said, the Rails community needs the caboose crew, like we need our gall bladders. It is just a little organ compared to the overall size of the body, but without it, you will not survive long, and if you do, you will be feeling so well.

It would appear that the rebels had struck their first blow. But more about that would be revealed on Day 3.

Chad Fowler still had the his job leading off the proceedings in the new, more corporate RailsConf. As such, the ukelele would be banished from the main stage, along with any other musical instruments during presentations. Joey, we miss your accordion, too.

Chad mentioned that there were over ten times more proposals for RailsConf 2008, than attendees at RailsConf 2006. That certainly explains why my proposal was not accepted... of course, the title being "Pedal To The Metal: Alternatives To Rails" might also have had something to do with it.

Anyhow, Chad was almost apologetic as he explained how people were pissed off about RailsConf 2006 because it had sold out so quickly, and now that they had increased the size enough, people complained that the conference was "losing it's luster." You can't win, dude! But I still support what you're doing.

At that point, he introduced Joel Spolsky. Now, when I had read that Joel would be the opening keynote for RailsConf 2008, I had been fairly surprised. Although the penchant of the Ruby/Ruby on Rails community IS to reach out to others for ideas and technology, with the well-publicized spat between Joel and DHH, the choice seemed a curious one.

Joel was funny, and entertaining. He had slides, and seemed like he was leading up to some big point. But after the dog and pony show was over, I felt like I had drunk an extra-large zero calorie soda: a feeling of fullness, but no actual nutritional value to it. I was not exactly disappointed, but I was far from impressed.

Next, I headed into the Entrepreneurs on Rails session by Dan Benjamin. The presentation was probably worthwhile if you have never formed a business before, but my attention wandered, which is why I will not be writing anything else about it here.

So far, I was zero for two on my personal "RailsConf 2008 was worth it" scale. Hmmm.

I got a bit more enthused at Micah Martin's session "10 Things I Hate About Web Development", where I finally got to see the long awaited demo of Limelight, which Micah had been dropping hints about at RubyConf last year. I have a separate posting I will put up with info on that session.

After that, with my energy picking up, I went to "Rubinius: Under The Hood and Behind the Curtain" presented by Evan Phoenix, Brian Ford, & Wilson Bilkovich. This was a fun and informative session about the current state of Rubinius, although if you have been following the various blogs/IRC/github you already knew what he was talking about. Still, it was nice to see the core Rubinius team in person, and to get the sense of the crowd's excitement about Rubinius. I will be posting separately about this session.

There was a great moment that is really representative of what I get out of RailsConf. Walking between sessions, I ran into Ward Cunningham. Not only did I get to introduce myself, and take another fanboy picture with one of the extremes, but we also stood around for a few moments and chatted about his experiences migrating MediaWiki to Rails.

Afterwards, I hung out doing a little pairing with programming buddy/collaborator Ari Lerner trying to help out with pool-party before his upcoming BoF about it later that night. I know you have not yet heard about pool-party, which is an auto-scaling solution for Amazon's EC2 service, since the first version was put up on github there at RailsConf. What makes pool-party unique is that it is a pure Ruby and open source solution to the cloud computing thing. Plus it is cool.

By the time we were done, we had already missed any chance of eating dinner, and also most of Charles Nutter's talk. I walking in to see a slide "You Are The Enterprise" from his presentation. That sounded silly to me, but without any context, I probably do not know what I am talking about here.

Next were the RailsEnvy guys presenting the "Ruby Heroes Awards". I have to say, those guys from RailsEnvy are pretty funny... and brilliant self-promoters. Plenty of people have already blogged about this, so no need to go on and on about it here, except to say they made some pretty good choices with the winners:
Evan Weaver, Tom Copeland, James Edward Gray II, Ilya Grigorik, Yehuda Katz, and Ryan Bates.

Then it was time for the big David Heinemeier Hansson keynote. After my tepid enthusiasm for the opening keynote in the morning, I hoped DHH would do something exciting. Well, that was not exactly what happened... but thought provoking, nonetheless.

His speech was entitled "The Great Surplus". The salient point seemed to be that the highly leveraged productivity that Ruby on Rails gives the community (and the unreal demand) will not last forever, or perhaps for even that much longer.

His prediction is that one of three things will happen:
1. The mainstream copies Rails with something else
2. Some other dramatic alternative arrives (new paradigm) that provides massive improvement
3. Rails itself becomes mainstream

So what to do about this? Invest in yourself. Regardless what happens with Ruby on Rails, if you better yourself it will last to next wave. And do something else beside programming! You need to train more than 1 muscle... same with non programming activities.. need to engage other parts of brain. And sleep more.

It is well known that tired people take longer to do work, and that the output is not as good as a result. More importantly, it takes a toll on that individual that leads to a longer term reduction of output. So why do we consistently see investors/executives pushing their technology teams this way. And why do we allow it, when we already know better?

I had seen a friend earlier in the day during the conference, who I had not seen since last year. His startup had become involved with a well-known incubator. But far from looking energized, my friend looked worn down. "I need a month with no electricity," he croaked. And this is where many, many people in the RoR community are actually hoping and praying to get to. This is what DHH was warning about.

After DHH finished his keynote, I ran over to the BoF for pool-party. The turnout was actually pretty good! Ari did a great job with his presentation, and at the end a guy from Amazon came up and chatted us up for quite a while. I look forward to switching over my AWS application to the pool-party as soon as it is ready!

Nice post, Ron! Had a great time making music on Saturday too.

A clarification: the reason there were no instruments on the keynote stage is just that we did it last year, and I couldn't think of anything interesting to do this year with it :)

Thanks for the feedback, Chad! I also had a great time at the Saturday night jam session... I will be posting about that in my "Day 2" coverage.

As far as expecting some music, I just figured with _why's performance in 2006, and you and Joey in 2007 (plus the Extra Action Marching Band!!!), we should expect some big musical number every year.

We weren't really trying to be divisive, and I'm glad that Chad is open minded enough (and cares about the community) that we can integrate next year . . .

I quite agree, and actually I am building up to the triumphant conclusion in my RailsConf 2008 - Day 3 post (sorry it is so late)...