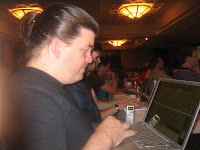 As the sun rose over the hills of North Carolina, the quiet betrayed a seething fire blazing in the hearts of three development teams. "Three teams enter, one team leaves!" Yes, I am talking about the main event, people, the one, the only, Ruby VM Smackdown! The room was jam packed, the anticipation was high.

As good fortune would have it, I was sitting right next to the head of the team who was my personal favorite to win the day. Yes, I am referring to Evan Phoenix, leader of Team Rubinius along with co-conspirator Ryan Davis. You should have seen the look at their faces when the JRuby team showed the Rubinius RSpec test suite as part of their demo! But I am getting ahead of myself...

I like the underdog in a fight, when the underdog is tough, and under-estimated by their opponents. On one side, the resources of Microsoft, on the other, the full power of Sun. And then, THE LADS. If you don't want to see that one go down, you have no passion for the cutting edge of innovation. And if you do not know about the history of innovation in the software industry, you might miscalculate the odds. Gentlemen, to your corners... I want a clean fight!

MC Chad Fowler got up, and gave a brief intro to the show. "We are about to see what Matz called 'wonderous' last night," he said. And it was true.

First up, was John Lam of Microsoft with IronRuby armed with "State of IronRuby".

Next, Charles Nutter and Thomas Enebo of Sun with JRuby using "Ruby for the JVM" style.

I will be posting individually about each of the Ruby VM contestants, and will update the above links when I am done...

After all that excitement, the crowd was starved. We shuffled out to eat our lunches, and converse on all we had seen. From everyone I spoke with, the mood in the crowd was firmly in the Rubinius corner, with a close second to JRuby, with third place probably going to YARV. Hardly anyone I spoke with at RubyConf had any interest in using IronRuby at all!

That is to be expected from a conference like RubyConf, well known for its strong ABM (Anything But Microsoft) attitude, which is pretty unfair. That said, I think the uptake in the .NET community will be the measure of the success of IronRuby, not whether they can get the typical RubyConf attendee to switch back to Windows.

In the afternoon, I got to see some great sessions, from:

I will be posting individually for each session when I get a chance, and will update the links here.

Once the afternoon's sessions had wrapped up, a large group of us overran a local BBQ joint named Mac's, with tasty BBQ, a great beer selection, and a bunch of Harleys in the parking lot. Despite our somewhat atypical appearance (nerd chic) for NC, we were welcomed warmly by the locals. There must've been 30+ people from RubyConf there, it was great!

We then returned at the perfect moment to hear Matz's keynote speech. And it was good. Really good. Matz is charming, and quite funny. His wit was so much better able to emerge in a forum where he was simply presenting, rather than the somewhat less successful "town hall" format that had been attempted the evening before. I have a separate posting with his remarks which will be up later:

Once the keynote had ended, I just had to go up and shake the man's hand. I know it may be corny, but I really did suddenly appreciate what he really does, which is to inspire the community. People keep looking to Matz for all the answers, but the answers are up to us, my friends. No superheros, remember?

Afterwards, I want to the legendary RejectConf, held right next door. Don't ask me how I wedged my way in, but I did it. To everyone who's toes I stepped on: sorry! There was a fun series of lightning talk (5-10 min) presentations of pretty much brand-new stuff. The beauty of RejectConf is its appeal to the ADD'd-out techno-junkie: every few minutes something else. I will be posting a rundown of RejectConf when I get a chance here:

RejectConf was really a great highlight of RubyConf. Once they kicked us out, the entire crowd immediately migrated directly next door to the hotel bar where we drank beers and chatted loudly about techno-babble to our great enjoyment. I staggered up to my room, to rest up and prepare myself for Day 3.
Posted by Ron Evans at 1:38 PM